In the 18 years I have been visiting Lesvos I have walked all over the island & found some wonderful places, many of them off the beaten track where most tourists fear to tread. I have used all the island walking guides available in print but the lack of detailed maps of the island is frustrating. As 2018 was also going to be a solo venture I invested in a handheld GPS, hoping I could wander more into the unknown with the reassurance of being able to backtrack to my car.

To get familiar with using a GPS, I took up Geocaching. This is an activity where people (cache owners) hide small containers with a logbook and often small trinkets to swap in all sorts of places (hollow trees, under stones, behind rocks, in bushes, under seats in parks, disguised as pebbles etc), publish the details and coordinates of the locations on a website (www.geocaching.com). People like me head off to find them. Once found you sign the log to prove you were there and record this on the website. Some make the caching a major outdoor activity, for me, it adds some fun to regular walks, many do drive-by caching travelling miles in their cars to pick up finds. You follow your preference. It is great for families – get the kids outside in the fresh air instead of glued to a screen.

There are over 300 caches hidden on Lesvos so I downloaded the coordinates of ones in the areas I would be visiting in April 2018 which might take me to some secret places. The co-ordinates ensure you can get to the right location (no guarantee you will find a cache if it is well concealed). Of the ones I actively searched for I found eight.  Some were just one-offs in familiar places (Perama, Perama Windmill, Aghios Ermoghenis) but others took me to some wonderful spots with the confidence I was not lost, even if I did not search for or find the cache. I did short walks to Tapanlee and Kanakis Watermills, which I had not visited before – interesting old ruins and popular with cachers judging by the log entries.

Of my longer walks, I did get to places I might not have otherwise had the confidence to trek to alone. From my first base on the edge of the Gulf of Gera, I hoped to get to the top of nearby Paliokastro and with the aid of a photo of a map board taken at nearby Plakada some years previously I was able to plot a route on my GPS mapping screen. 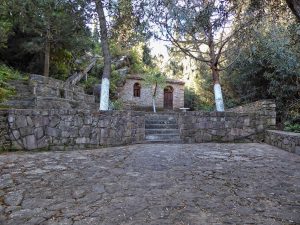 This took me from the car park up through the back lanes of the village, out onto forest trails with stunning views down to the gulf, to the Hidden Church of the Madonna (partially built into a cave) and then on a long upward slog to the summit of Paliokastro where there are ancient stone remains and 360° views. Trail marking on Lesvos continues to improve but it is not comprehensive, can peter out suddenly and needs to be backed up by printed or downloadable copies of the excellent map boards now installed around the island. Serious walkers require to plan – routes, start points, timings – and these boards are not even catalogued anywhere – you just find them by chance. I did find a cache at the cave church but failed to find one at the summit of Paliokastro, but the main achievement was getting there! The downhill return was tricky, steep slippery rocks initially, but using the GPS meant I could skirt around bad sections but still have a guide in my hand to point me back in the right onward direction and returned safely to Plakados. 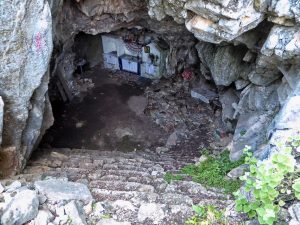 Later in the week, I was staying at Paralia Thermi and from there it was a short drive to the start of the track that would take me (I hoped) high into the hills to find the hidden cave church of Ag. Filippou. There was a cache hidden in the cave so I was confident of finding the location at least. This became a glorious voyage of discovery – one of the best walks on the island. Tracks took me through olive groves and then started to narrow & climb up through hillsides on ancient kalderimi and lush vegetation with an abundance of herbs & wildflowers – oregano, lavender, poppies, orchids – and many curious creepy crawlies (iridescent beetles, spiders, butterflies, bees). There was the occasional handmade sign to reassure me I was heading for Filippou but without the cave co-ordinates, I would not have got there. The increasingly scant path seemed to vanish and before me, was a deep valley with far-reaching views beyond. The only way forward was a boulder-strewn downwards slope. I hesitated. The GPS assured me this was the right way and after a few careful steps, I could see a further section of a rocky path and below what might be the cave location. Success! I slithered down the final uneven slope and was at the wide mouth of a large cave with steps leading down and visible from here a cloth-covered altar with all the usual trappings of a Greek church. Once inside the GPS lost signal, but there was a clue as to the cache hiding place and within a few minutes I had solved the riddle & was adding my name to the log – the first finder in over 18 months. As I write this (August 2018) no-one else has since recorded the find. One of my friends on Lesvos was astonished I had found the cave – he had recently walked there with a group of friends but he did not expect anyone other than locals would find the place.

From the cave, I scrambled back up to the clear track, backtracked to the main path then continued on a kalderimi towards what promised to be a gorge somewhere down below.  Indeed it was a gorge – a very deep & moonscape like gorge. I had a lot of trouble getting down to the now dry river bed. There was no clear path – just a choice between a direct descent down a treacherous rocky slope or a convoluted route through olive groves. I chose the latter, zigzagging amongst the trees and terraces, scrambling down the latter to lose height, had a scary moment when I lost my footing, but still keeping the GPS in hand to show me where my goal was, often heading in the wrong direction until I could find a safe place to descend. I reached the gorge floor with relief. 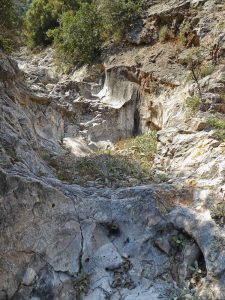 There was a cache located here and without its co-ordinates to bring me to this spot, I would never have known of the gorge’s existence. Awesome! Huge water-scoured boulders and hollows, rocks worn smooth by the force of the now dried upriver. A fantastical landscape. All I had to do was make my way along this dry valley and I should (in theory) arrive back at the track I started on and back to my car. Along the way, there was another small cave in the cliffside with a cache which I found easily. This was an excellent walk but not to be undertaken without confidence, good boots and preferably a GPS unit. I did find a link to the route I took on the cache pages so would like to express thanks to the cache owner for the inspiration.

So to anyone out there looking for something new to do on Lesvos, something to add value to walks, an adventure suitable for all ages I can highly recommend Geocaching.  Many people use a GPS enabled mobile phone rather than a dedicated unit (I use a Garmin eTrex 30x) so you do not even need to invest in any equipment. There are caches all over the island waiting to entice you to visit the secret corners of Lesvos. If you find a tiny ladybird button in the container then you know I got there before you!

Click here to find out more from “The Ultimate Guide To Geocaching”.

Click here if you want to learn more from geocaching.com.