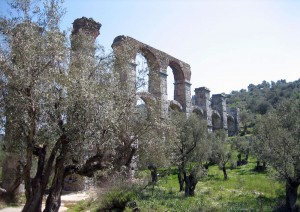 The Roman Aqueduct at Moria is one of two sections of a 26 km long structure that supplied approximately 127 million litres of freshwater per day to Mytilene.

It was probably constructed at the end of the 2nd or the beginning of the 3rd century A.D. The fact that any of it is still standing bears witness to the strength of the original structure. The site has not been excavated but a geotechnical study of the ancient aqueduct was completed in 1993. Today a preserved section 170 metres long and including seventeen arches is visible. The site is free to visit, so why not enjoy this remarkable and beautiful part of the Roman Empire.

The picture above is February in “The Beauty of Lesvos” calendar, available for 2013 from Lesvos Calendars.