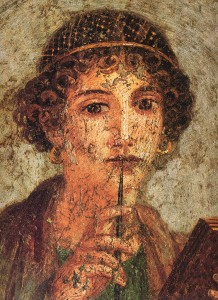 The BBC spelling of Lesvos as Lesbos is a little embarrassing but I have presented the programme title and review as written by the BBC. Please accept my apologies.

With a PhD in Papyrology, Margaret Mountford (The Apprentice) goes in search of the truth behind the legend of Sappho, the most controversial writer of the ancient world and the first authentic woman’s voice in western history.

Was Sappho indeed the first lesbian – a priestess, prostitute, stern schoolmistress or aristocratic lady of leisure, as readers over the centuries have variously alleged? Margaret looks at how each generation’s view of the archetypal liberated woman of letters tells us as much about us and our fears and concerns as it does about her.

Visit the BBC website Sappho: Love And Life On Lesbos

When you start looking for information about Sappho it is easy to become very confused. Every writer has a different opinion about her. There are a few things that remain undisputed.

We hope to bring you a more up to date page soon.

In the meantime, you can read one view of Sappho Wikipedia.

There is also a new book: 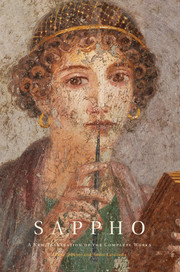 Sappho
A New Translation of the Complete Works

Edited and translated by:
Diane Rayor

On March 25, 1821 the Bishop of Patra, Germanos, began the uprising that started the War for Independence. Today it is celebrated with parades by school children in many villages on the island. Independence Day also coincides with the religious … Continue reading →
Oct
28
Sat
all-day Η Επέτειος του ΟΧΙ – “Ochi Day”
Η Επέτειος του ΟΧΙ – “Ochi Day”
Oct 28 all-day
Celebration of Greece’s refusal to yield to the powers of the Axis in 1940. In October 1940, Benito Mussolini, backed by Germany, demanded to occupy Greece. General Ioannis Metaxas famously responded “Ochi!” – “No!” in Greek.
View Calendar
Add